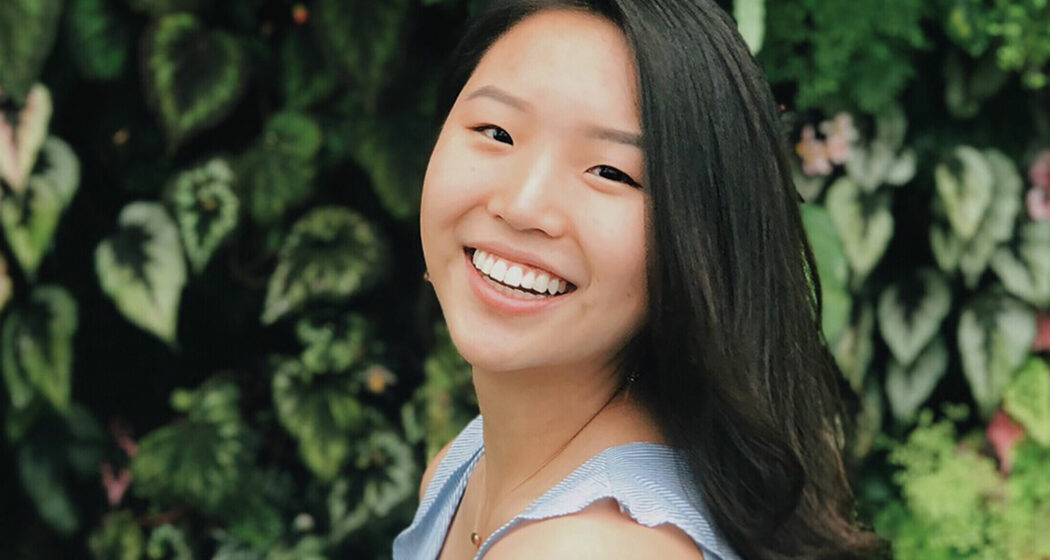 “I think it’s every individual’s responsibility to their respective community, whether it’s big or small, to make it a better place than they found it.”

Zhou (“Daisy”) Fang ’17 defines citizenship with self-possession that belies her youth. But considering the steps (and leaps) she took at Peddie in five short years — from being a nervous, 13-year-old international student to becoming an alumni volunteer and the dedicated recurring donor she is now — that’s not really surprising. Daisy has built her path with the help of Peddie mentors, and now walks the walk of citizenship with confidence. Giving back to Peddie, honoring those who influenced her development, is a big part of it.

“Growing from someone who knew very little and really got a lot of help from the teachers, the upperclassmen, the prefects in the dorm really allowed me to grow into the person I am,” she said. “Being part of the Peddie community helped me realize how much genuine relationships mean to me, and that makes me want to give back to the community more.”

One of the most important skills Daisy gained at Peddie is the ability to ask for help. It’s something that set her apart from many of her Duke University peers.

“I think that’s something unique to Peddie,” she mused. “We’re so close to all of our teachers, whether that’s in your classroom, outside on the field or in a club setting. I got really comfortable talking to adults and asking questions. I think that helped me tremendously, both in terms of succeeding academically and in finding mentors and mapping out my career path.”

Daisy assumed the role of mentor herself as a Peddie senior, becoming an ISO (International Student Organization) leader, a prefect and captain of the varsity tennis team. She also took on leadership positions for the track team.

Despite a heavy workload at Duke (she double majored in statistics and psychology, with a concentration in data science) and at her new position at Boston Consulting Group, Daisy still prioritizes being a supportive friend.

“A lot of my mentees and prefectees at Peddie still reach out to me,” she said. “Like, ‘I’m deciding between these two colleges and I don’t know which one to choose. What are your thoughts?’ or things like that. It’s really great to continue keeping up those relationships.”

In spring 2000, one of Daisy’s good friends at Duke began volunteering for 1Point3 Acres, a non-partisan nonprofit that’s run by first-generation Chinese-Americans and documents the spread of COVID-19. That May, she followed suit, contributing her stats skills to their site and finding it immensely rewarding.

“I thought it was a really cool initiative — the fact that they’re able to use data to tell a story and just keep everyone more informed,” she said. “That’s something that really aligns with my academic interests, and it’s also a mission I really believed in. I wanted to do something that’s meaningful in this time, where maybe five, 10 years from now, I can look back and say I wasn’t just complacent and waiting for this pandemic to be over; I actually was active in helping other people.”

In 2019, Daisy established a recurring gift to Peddie. She wanted to offer a tangible, consistent thank-you to the school that was solidly invested in her development and that supported her so generously.

“Every aspect of the Peddie community — from faculty, staff to fellow students — has been instrumental in promoting my personal growth,” she said.” The tremendous support and resources that Peddie has made available to me was beyond my and my family’s expectations. The gift represents my commitment and gratitude for Peddie.”

The second component to why this young adult set up her gift is about “building a habit for philanthropy” to Peddie — something she wants to prioritize.

“My eyes have been opened to all the ways that I am really privileged compared to a lot of different communities, and I think it’s really important for me to give back and help others,” Daisy said. “And that habit of philanthropy should start earlier than later.”

What do you want Peddie to be in 25 years?

Now it’s your turn to invest in the best future for Peddie and inspire others to join you.

Connect with us Support ONE PEDDIE